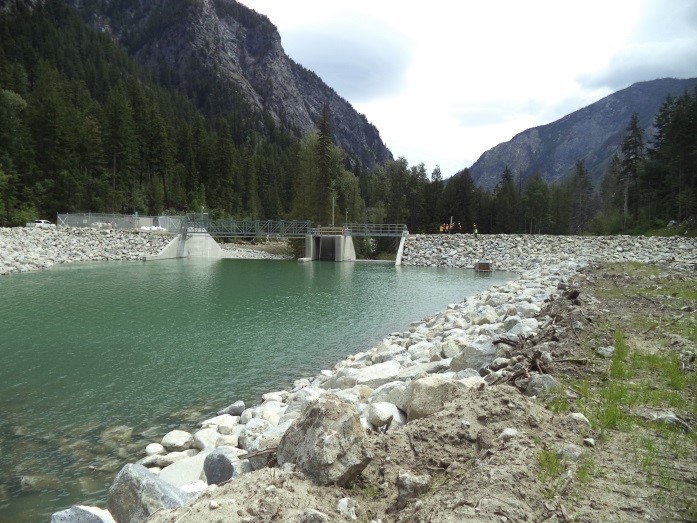 The Kanaka Bar Indian Band is a community within the Nlaka’pamux Nation and is located between the towns of Lytton and Boston Bar in the Fraser Canyon. Kanaka Bar Indian Band’s traditional community name is T’eqt’aqtn meaning “crossing-place”. Studies show that Kanaka lands on both sides of the Fraser River were occupied year round in permanent pit houses and that the surrounding watersheds were used for at least 4000 years.

The Kwoiek Creek watershed provides the community with the land and annual resources that allow the membership to live today as they have done in the past. Kanaka Bar Indian Band has six reserves totaling approx 500 acres. Of the 218 members, 60 are permanent residents with that number doubling during the memberships’ return for the summer fishing and gathering season.

Whyeek IR 4, Kanaka’s largest reserve, is located at the confluence of Kwoiek Creek and the Fraser River, a location that provides the community with its best summer fishing grounds. When the reserve lands were allocated, this reserve was used for living purposes and a water license was granted on the Creek for both irrigation and housing. However, the last known permanent membership occupation on the Whyeek Reserve was in the 1960’s, and CPR and BC Hydro are the only users of the reserve land. With no other 3rd party development on the horizon, the reserve was destined to remain unoccupied.

This question was posed by Patrick Michell, currently the Kanaka Bar Indian Band Community Liaison, in his 2008 written submission to the Environmental Assessment Office regarding the proposed Kwoiek Creek Hydroelectric project.

In the 1950’s, family groups began leaving the community because of a lack of land for housing, water for cultivation and a chronic job shortage. The initial boon created by rail and forestry had plateaued and began to dwindle. Faced with a now flat and declining economy, and with no ‘white knights’ on the horizon, a hydroelectric project represented a very real opportunity for the community to improve its quality of life because it would bring in “own source revenues.”

As Patrick Michell says, “By developing its own project, the Band would get money from somewhere other than the government and as these would be annual revenues and not a one-time lump sum payment – the impact would be long-term.” With the projected revenues, the Band could consider: purchasing crown land for housing and agricultural purposes, purchasing or establishing local area businesses where year-round jobs would be made available and supporting membership in both education and health – two areas, chronically underfunded and oversubscribed.

If someone else can do it, why can’t we?

The power of Kwoiek Creek has always been known to the Kanaka Bar people. 1n 1990, Chief and Council submitted a water license application to use the waters of Kwoiek Creek to generate electricity which was accepted by the Province for review. After gathering baseline data and undergoing an Environmental Assessment Office (EAO) led review in 2001, the Band formed the company Kwoiek Creek Resources Inc., to pursue the development of a hydro project. Having the vision to harness the Creek’s energy for electricity resulted in self-realization; despite its best and most creative efforts, the Band did not have the financial resources, capacity or necessary expertise to get the project into the next stage -construction.

In 2004, after conducting a nationwide search, the KBIB met with Innergex, a Canadian independent renewable power producer. The two entities discovered that they shared similar goals, principles and vision and in 2005, an equal partnership between the Kanaka Bar Indian Band and Innergex was created – Kwoiek Creek Resources Limited Partnership (KCRLP).

As part of the agreement, the Band provided the partnership with the active application for a water license, the reserve lands needed for the powerhouse site, the base-line data and the existing agreements between the Band and CPR and BC Hydro. Innergex provided project equity and expertise in developing, constructing and operating hydroelectric projects.

The $180 million Kwoiek Creek Hydroelectric Project is a 49.9MW run-of-river project located on the lower reaches of Kwoiek Creek. Access preparations began in July of 2011, and a ground breaking ceremony was held in December of 2011. Construction of the project was completed in December 2013. The average annual production is estimated to reach 223,400 MWh, enough to power approximately 22,000 homes.

The Project diverts a portion of the flow from Kwoiek Creek through an intake structure located upstream of the mouth of Kwoiek Creek. Water is diverted into a 7.2 km long buried steel penstock to the powerhouse where the water, now under pressure, spins turbines attached to generators to create electricity. The water is then channeled out of the powerhouse so it can rejoin Kwoiek Creek. The project’s 71km transmission line, built between the generating facility and the Highland Valley substation at Mamit Lake, near Merritt, delivers the energy to BC Hydro under a long-term Electricity Purchase Agreement obtained in 2006.

Unlike other hydroelectric projects, there is no dam or significant storage of water above the intake. Flow is maintained at all times within the bypassed section of Kwoiek Creek to sustain fish, aquatic and riparian habitat.

The Kwoiek Creek Hydroelectric project area lies within the traditional territory of the Nlaka’pamux Nation, which is comprised of fifteen member communities and two Tribal Administrative bodies. The watersheds of five of these communities are directly impacted by construction and the transmission line.

Kanaka Bar Indian Band wanted to ensure that the Hydro project was developed in a manner consistent with their Nation’s traditional laws, inherent title to the lands, and use of its resources. All fifteen of the Nation communities were notified of the application and baseline data gathering, and given the option to participate in the project’s review individually, through a First Nations Advisory Group (FNAG) and by working directly with Kanaka and the partnership’s researchers, archaeologists and scientists. Seven of the fifteen communities participated in the review of the project identifying potential impacts and providing advice and guidance on reducing or avoiding the effects of those impacts.

Kanaka’s own membership were involved from the outset of the development stage and were not only the project’s strongest supporters, but also its best critics. The overriding principle that “it be done right” meant that no question or comment was too small and that all members shared their hopes and concerns freely.

In August 2006, KCRLP submitted an updated Project description to the EAO outlining modifications to the 2001 design. These included a reduced capacity of 50MW instead of the originally proposed 80MW and new locations for the intake, powerhouse and transmission line. Due to these design modifications and new assessment methodologies that had come into effect, it was determined that additional information to that of the 2001 Project Report Specifications would be required.

An amended application was submitted by KCRLP to the EAO in September of 2008 for a harmonized review of the revised hydro project (provincial, federal and First Nations). Harmonization enabled KCRLP to satisfy both the provincial and federal requirements with efficiency. In March 2009, a comprehensive report was produced by the EAO, and an Environmental Assessment Certificate was issued by the province. The Canadian Environmental Assessment Office (CEAO) issued a favorable decision in October 2009 and the Nlaka’pamux gave their approval in a nationwide meeting held in August of 2010.

The contracting structure of the project agreement included hiring of Nlaka’pamux during the development, construction and operation phases. Unfortunately, many members face systemic and structural barriers to employment – but this could be overcome. As Patrick Michell explains, Kanaka Band’s own criteria for employment was two-fold. “First, you must apply and if a need arises, you are given a chance to demonstrate Qualified, Competent and Reliable – Ready, Willing and Able.”

All that was requested of the hydro project employer was at least 24 hrs notice of any HR need and Kanaka’s goal was to produce at least ten resumes for that position. Despite this unorthodox hiring structure – something amazing happened.

Forty-eight percent of the employees working on the Kwoiek Creek Hydroelectric project were First Nations and an additional fifteen percent were hired regionally (Boston Bar, Merritt, Lytton, Spences Bridge and Ashcroft). Twenty-four Kanaka Bar Band members applied for jobs and eighteen were gainfully and meaningfully employed for more than two years working security and as laborers, equipment operators and carpenters. More importantly, after the construction phase, the now experienced members who wanted to continue to work have been able to find employment at other sites.

Contractors’ last piece of equipment leaving the site June 2014. Time for the Band to start replanting.

Partnering with Innergex has had a positive effect on the community, especially the youth. Patrick Michell says, “Working side by side with Innergex and the project contractors, built relationships, capacity and confidence. Our young people now say that they want to go to school to become engineers, scientists or lawyers.”

The new, own source funds has allowed the Band to support the aspirations of the youth and to meet this strong demand, the Band hired an Education Coordinator in June, 2014.

Patrick Michell explains that there are intangible benefits that are difficult to measure. “My own benefit analysis is that the 36 years taken to get the project into operation is reversing 150 yrs of colonization. Graduation levels are on the rise, addiction has declined and suicide has been eliminated. How? Because the vision of leadership was to take control of the future by giving the present membership hope by the simple return to individual and community self-sufficiency.”