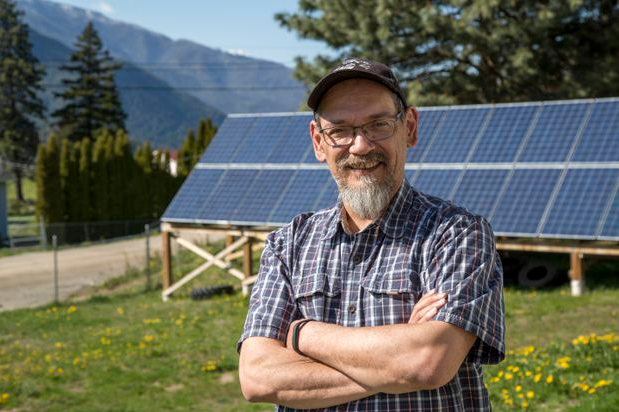 Photo Above: Patrick Michell is chief of British Columbia's Kanaka Bar Indian Band, which is using advice from a UBC Sauder-hosted case competition to make itself economically independent and sustainable. Installing solar panels was among the competitor recommendations.

Two years ago, a remote Indigenous community in B.C.’s Fraser Canyon became the subject of an international case competition hosted by the University of British Columbia’s Sauder School of Business.

Unlike most student competitions that end with the selection of a winning team, the Sauder event generated continuing practical advice for the “client,” the Kanaka Bar Indian Band, long after the wrap-up of the week-long proceedings. The postcompetition ripple extended to others as well, reshaping how Sauder and some competition participants interact with Indigenous communities.

“The value provided by this kind of case study is incomparable,” says Kin Lo, senior associate dean of students at Sauder and director of the 12-school “summit” case competition since its inception in 2013.

“It is on a wholly different level,” he adds, with students expected to respond in real time (they had 24 hours) to solve an actual problem posed by the band.

Patrick Michell, chief of the Kanaka Bar band, whose territory has about 70 residents and is located 250 kilometres east of Vancouver, made the initial overtures to Sauder that led to his community starring in the 2016 case competition.

The band, which developed a $180-million project in 2014 that sells electricity to BC Hydro, has spent the past few years mulling hundreds of options to turn itself into an economically sustainable, energy self-sufficient community. With Kanaka Bar’s ambitions in mind, competition participants were asked to identify priorities for investment and infrastructure renewal.

“Too many options create [decision] paralysis,” says Mr. Michell, of his band’s extensive analysis conducted prior to the case competition. He says the 48 students from 12 teams delivered “amazing presentations” with a strikingly similar message: diversify, start small and, when successes occur, scale up.

Since the competition, Kanaka Bar has implemented several recommendations from the student teams that support the band’s overarching determination to find alternatives to depending on non-Indigenous outsiders. The band has expanded its commitment to solar power, installing three panels over the past year.

As urged by the students, the band built 18 new housing units (with more on the way), successfully attracting some of Kanaka Bar’s 230 registered members to return home to live where they work. With small-scale agriculture flagged as a community benefit, the band added a 60-chicken coop (for local egg consumption), a community garden and new bee hives for honey production.

Also in the works is new water infrastructure to ensure a secure supply for Kanaka Bar and nearby Indigenous communities.

“The biggest thing that students did besides validating and helping us prioritize was that they reaffirmed there is a possibility of sustainable economic activity and urged us to build on our successes,” says Mr. Michell, a UBC law graduate.

Mr. Michell, centre, of the Kanaka Bar band is flanked by the UBC Sauder team that placed second:
The students, from left to right are: Ali Jatoi, Samantha Walsh, Jessica Pan and Dabir Rashid

Unusual for a competition, participants work directly with their client, with the chief making a presentation to kick off the case and other Kanaka Bar members sitting in to soak in the deliberations.

“All through the 24-hour [case analysis] we had to keep going back to [consider] who are the stakeholders involved,” says Ali Jatoi, then a third-year commerce student and a member of the second-place team from Sauder. (The University of Southern California placed first.) “Rarely has there been a chance to interact with the stakeholders themselves.”

Student team members, he adds, were acutely aware their advice carried consequences. “The biggest thing we took away was how is this actually going to help them [Kanaka Bar members] achieve their goals,” says Mr. Jatoi, now a Sauder graduate and making plans for medical school. “Our work stopped at the end of the [competition] week [but] that is when their work begins.”

At 22, Mr. Jatoi is part of a younger generation getting exposed to Indigenous issues in the formal curriculum and in extracurricular activities such as the case competition. At Sauder, one undergraduate course required Mr. Jatoi and fellow students to communicate with a local Indigenous community and draft a relevant business proposal.

“That [experience] was the starting point to realize you do have to consider the individuals behind all of these businesses as opposed to what the theory, financial statements and annual reports are telling us,” says Mr. Jatoi.

In 2011, Sauder received $2-million from Bank of Montreal of which part was allocated to fund Indigenous-infused curriculum and other activities, such as the case competition, through the BMO Business Aboriginal Teaching Fund, according to a school spokeswoman. When Kanaka Bar served as the centrepiece of Sauder’s international competition in 2016, it was the first time an Indigenous case had figured in the event. “At that time, it was groundbreaking,” says Mr. Lo. “Since then, we have brought on a First Nation client in each of the three years.” He adds: “We will do so for the foreseeable future. ... It is part of our contribution to truth and reconciliation efforts.”

Activities such as the case competition, he says, send a message “that there are immense opportunities for First Nations and for people working with First Nations to develop and contribute to their development economically.”

For Kanaka Bar’s Mr. Michell, the competition raised his community’s profile at UBC but also highlighted that his band is moving past its colonized past to define a sustainable future on its terms.