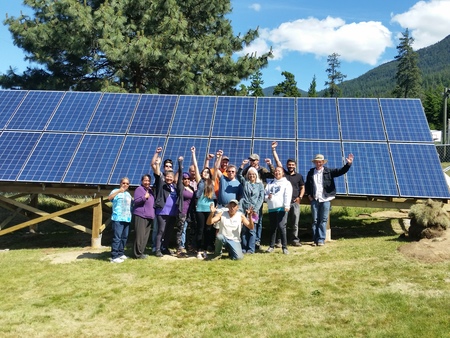 “At an early age, I saw my mother devoting her time in institutions that developed human capital and intellect in different ways and shape. My father had the same kind of will and volunteered a lot of his time managing public infrastructure where we used to reside. I knew I wanted to use my knowledge and education in a way that benefited the greater public interest, just like my parents,” wrote the former Beedie student.

Nayani chanced upon a work opportunity with the Kanaka Bar in late summer 2012. Writing about his first experiences working for Kanaka, he mentioned, “We met at an interesting time in both of our lives. Kanaka and I were both at a growth stage. They needed someone to help with the design of sustainable systems and processes pertaining to governance and institution building to serve present and future community needs. And I needed an opportunity to explore myself, learn more about Canada and apply my values, skills, and experiences in a real-life scenario.”

Starting as an intern in September 2012, Nayani worked with the community on issues around membership, elections, and governance for a period of eight months. As his work progressed, the community moved its attention towards better financial management, the alumnus stated. “This was a priority for the community because they were already a year into construction of the 49.9 MW run-of-river Kwoiek Creek Hydro Project in its traditional territory.”

He opined that the community was very prudent to start thinking about the financial returns from the project while the project was still being built. At around the same time, the community also asked Nayani to look into their finances. “They asked me to start looking at ways to improve the financial management systems and help design practices, procedures and policies that will essentially see returns from Kwoiek being spent in a way that was transparent, accountable and fair for the entire community,” mentioned the Beedie MBA grad. He explained that this is how his role changed and he was brought in as the CEO.

When asked why he chose to continue his association with the community, even after his co-op term, Nayani wrote, “I simply wanted to be a part of the resilient movement, forward thinking, community centered, land-aware work happening within Kanaka.”

Following his internship, Nayani stated that as CEO he sought to guide the community towards financial self-sufficiency. In this direction, they enacted a Financial Administration Law in 2014, Nayani wrote, to aid the financial self-sufficiency of the community. He further mentioned that to provide additional assurance to the community about their financial health, “we worked with the First Nations Financial Management Board (FMB) to secure their Financial Performance certificate for Kanaka.” The CEO also mentioned that these efforts were supported with investments in the technological infrastructure required to manage all information, according to the community’s will.

Moving towards self-sufficiency, they started working on planning for the community and looked at the land and resources, described Nayani. “We did a thorough analysis of the community’s land, its challenges, and opportunities. The exercise led the community to create its first vision statement, which helped it to use its land and resources in a sustainable, self-sufficient and vibrant manner.” This vision, Nayani mentioned, was then put in a five-year implementation plan, called the Community Economic Development Plan (CEDP).

The CEDP outlines how the community will become self-sufficient over time by implementing various initiatives and projects around foundational infrastructure and policies, food and energy security, human capital development, and better financial management.

Nayani reports that Kanaka Bar is in the third year of implementation of its CEDP, and his role has now switched from being CEO of the entire community to being CEO of the new economic and business development arm. He informed The Peak that under his new role he leads and manages five separate business entities. These businesses, he states, “collectively have a mandate to create meaningful work opportunities for people in the community, improve and maintain community infrastructure, and further community’s economic development, while respecting the land and resources.”

Providing an example of the community’s progress towards self-sufficiency, Nayani stated that “In 2012, we used to have 6 people working for the Band in any given month. But because of proper structuring, visioning, and planning, today we are creating opportunities for at least 30 people each month.”

“The impact of climate change will be most damaging for communities that are vulnerable, rural or remote, unless they move towards becoming entirely self-sufficient on their own land and resources (just the way our pre-colonized ancestors used to live) with modern tools and techniques. At Kanaka, we are doing just that.” – Zain Nayani, CEO of economic and business development, Kanaka Bar Indian Band

Nayani stated that since the inception of Kanaka’s CEDP, a trust fund for future generations of the community has been established. He stated that they have also introduced the concept of permaculture and growing food in the community, bought more land for future development, and built four small-scale solar projects and a brand new 10-unit apartment complex, on top of renovating/retrofitting all existing homes. The present projects include working towards micro-hydro and small-scale wind energy projects, more affordable housing, and a rest stop area in Fraser Canyon on Highway-1, the CEO reported.

When asked about his vision for the future with Kanaka, Nayani wrote, “I’m trying to phase myself out of my current role.” He explained that his work with the Band back in 2012 stood at a point where he wanted to see himself completely phased out of each of his roles. “That is the natural evolution of my role, true sustainability for the community, as far as I’m concerned.”

Apart from his work with the Band, Nayani started his own independent practice, ZN Advisory Services in 2013. He stated that he has worked and learned with various communities and institutions in B.C. and Canada, through his practice. One of his projects involved work with the First Nations Fisheries Council and Department of Fisheries and Oceans Canada. He also mentioned his involvement in some communities in interior B.C. on a project for strengthening the institutions and organizational structures of the communities involved. Outside of work, Nayani strives to live a sustainable life with as little footprint as possible.