Located 14 kilometers south of Lytton, British Columbia, Kanaka Bar Indian Band is one of 15 indigenous communities that make up the Nlaka’pamux Nation today.

Today, the community and its residents choose to self-identify as Kanaka Bar, while never forgetting their indigenous history, their connection to the land and their responsibility to care for it.

History & Culture
Based on oral history and now archealogical data, it is known that the community's Tradtional Territory has been used and occupied for over 7000 years. As part of the Nlaka’pamux Nation, Kanaka Bar shares a similar language, culture, laws and spirituality (and colonization experience) with about 6,000 other Nlaka’pamux.

There are measurable differences between the community and the Nation though, as Kanaka Bar residents have a community-based Traditional Territory created by membership's year round occupation of distinct watersheds; year round use of the land and resources within the watersheds; and the community based jurisdiction to determine both land and resource uses within the Traditional Territory.  Historically, any third-party wishing to use Kanaka's watershed land and resources had to ask first and anyone found on the land without consent was asked to leave or face physical expulsion or death. Membership must also seek permission from the Kokpi's before they use land and reocurces too. Inherent in this jurisidction is the onerous requirement to ensure that the land and resource can handle the proposed use(s) without adverse impact to future generations.

Contact & Colonization
Indirect contact with the western explorers first came through stories told to us by visitors from other Nations. Eventually, the barter goods (knives, denim, pots, buttons etc.) came over the trade trails as Kanaka Bar's dried salmon was (and still is) a highly sought after food item (dry salmon is easily transportable, stores well and is high in nutrition). Actual “first contact” occurred in June 1808 with the arrival of Simon Fraser. Fraser's diary describes the presence of the barter goods and he named the people he met the Couteau tribe, the french word for knife, due to his inability to pronounce or spell Nlaka'pamux.

The first 50 years after contact saw Kanaka Bar residents living in relative harmony with the initial explorers, with Kanaka Bar members providing shelter, trading food, clothing and other wares with these first visitors. This harmony continued until 1856 when the “discovery” of gold in the Fraser Canyon brought in an influx of miners and as a result the Fraser Canyon war was fought until August 1858 at which time an inofmal treat was made with the miners. This was immediately followed by colonial officials and then settlers. These new people were no longer visitors and a dramatic change occurred for the Kanaka Bar people, as the well honed systemic colonization processes instituted resulted in little or no regard for the Nlaka'pamux and their way of life, customs and laws.

Ultimately, Kanaka Bar and its people experienced many hardships and as a people, our way of life diminished (but did not end) thus eliciting recently from a Kanaka member that "despite the best efforts of a lot of people, we are still here!"

Two excellent ways to get an insight into the adverse impacts of colonization can be read in the 1910 Memorial to Sir Wilfred Laurier and the 1967 Lament for Confederation copies which can be accessed by clicking on them right here on this paragraph.

We beleive that recovery requires:

Our ancestors who fought and ultimately settled the Fraser Canyon Way had a long term vision. In order to survive, the Nlaka'pamux somehow knew that they must not be conquered. Rather than die in battle, The Nlaka'pamux entered into an informal peace treaty which subsequently allowed the Colony to be declared.  The law of Canada today now confirms that Aboriginal Rights and Titles that existed before 1846 were not extinguished by confederation and that the governments of today own use and occupation is subject to indigenous jurisdiction unless the first peoples were conquered or they signed a land treaty.

For Kanaka, this means that Canadian law now confirms and supports what we have known (and said) all along, that all land and resource uses within our Traditional Territory can only occur with our consent. It took over 150 years to get to where we are now and it will take a little while to recover from what happened but we are pretty optimistic now that the worst is behind us.

The recent Truth and Reconciliation Commission's report and recommendations, the new Canadian Government and the Provincial Government, recent meetings with B.C.'s First Nations leadership are giving every indication that we are headed towards a new future for all - one built on foundations of trust, respect and collaboration.

As Kanaka moves forward with recovery, what we do will be shared at our community gatherings, in person, on our webpage and in our future presentations. It is hoped that our audiences will realise that recovery can benefit everyone and we also hope that our story will be able to showcase what can be done when everyone works together.

In the meantime, as Kanaka learns more about our stories and documents that make up the written history, we will add to the following chronology. As much as we can, we will also scan and save to our webpage photos, maps and documents that we find so that everyone can see for themselves what happened and is happening.

Kanaka's information might read like a sad story at first but we do not feel that way - we are getting prepared for a happy and prosperous future. 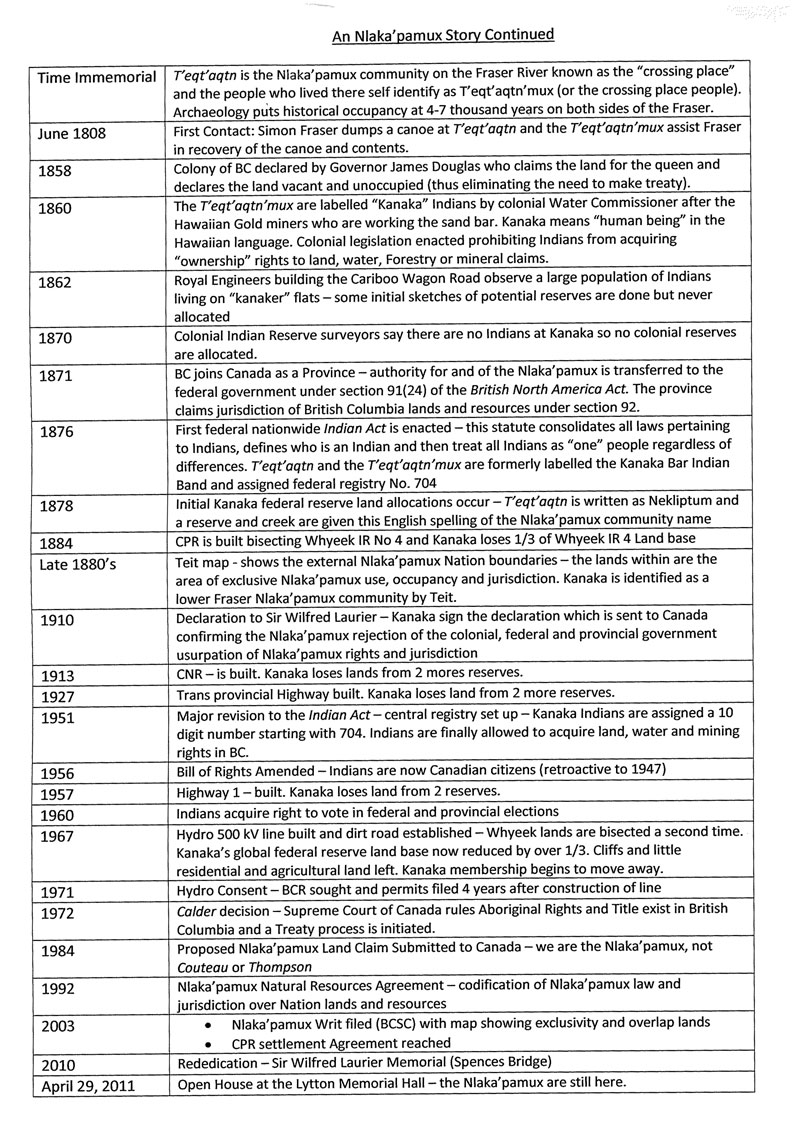